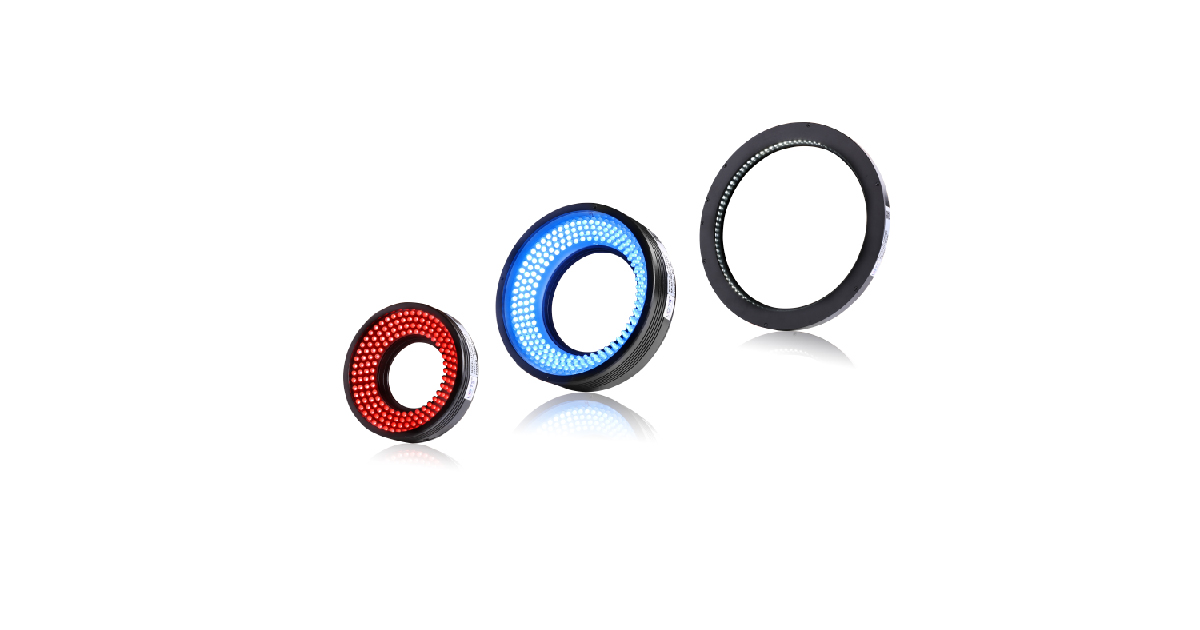 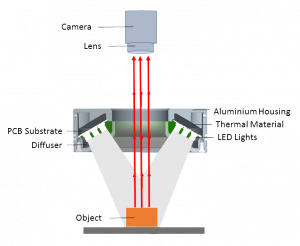 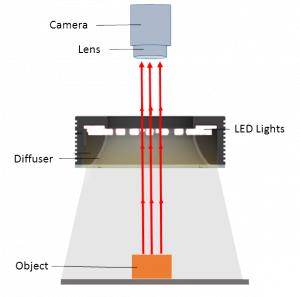 Shadowless Ring Lights are designed with arrays of bright LEDs to form a uniform illumination area directly below when light passes through it. Character detection, defect defection, reflective surface inspection and packaging testing are some of its applications. 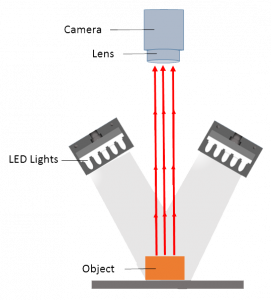 Bar Lights are available in various lengths ranging from 10mm to several meters.  These light sources are flexible to combine and adjust the illumination angle as per the need.  The inspection of damaged packaging, stretch film breakage, broken masking tape and surface defects on large surfaces are few of its applications.

Coaxial Light sources are highly suitable to perform the scratch inspection on smooth surfaces as they emit high-intensity uniform light using high-density LED arrays.  They eliminate ghost images by using a specially coated half-lens to direct reflected light on the workpiece and the CCD camera to be on the same axis. The uses are to detect QR code printed on metal/glass, LCD screen defect and laser marking on the wafer, metal surfaces, bearings and many more.

Coaxial Parallel Light sources use the scattered light from high-power bright LEDs after passed through a specially coated lens.  These lights are suitable for laser engraving recognition, detecting tiny bubbles on glass and scratches on reflective surfaces.

Coaxial Flat Light sources unite the advantages of a coaxial and a shadowless light source even for a complex surface using specific optical materials.  Applications include high-reflective surface inspection, to detect bumps, dents, cracks, water ripples and other defects.

Hole Flat Light sources provide very uniform and soft illumination.  The low and high working distances impute to the effect close to the ambient and coaxial type of illumination each.  Glass defect detection and positioning inspection of metals, mobile phone screen, and electronic components are some of the uses of this light source.

Broadside Hole Flat Light sources have LEDs arranged onto the sides of the surroundings similar to the Broadside Flat Light source, but the light emission happens through the diffuser to produce a large-format uniform illumination.  These are helpful in the detection of positioning and defects of products where large-format uniform illumination is required.

Shadowless Flat Light sources have bright LEDs arranged onto the sides of the surroundings and produce uniform illumination through the diffuser.  From the emitted light, some part of the horizontal light is converted into vertical uniform illumination to reduce the shadow to a minimum.  Applications include character detection, surface inspection and appearance inspection on metal components, ceramic surfaces and in the medical industry.

Dome Light source is known for the effective elimination of glare and shadow effects through diffuse reflection by the dome-shaped surface.  This type of illumination is suitable for inspecting scratches, stains, cracks and marks on curved metal reflective surfaces and plastic packaging.

The Quadrate Light source uses a specific method to convert the vertically falling light into a multi-angle uniform illumination mainly at medium and low angles, which can effectively reduce the shadow thereby improving the stability of feature detection.  It is applicable for chamfer detection, character detection, laser etching detection and flatness detection on square-shaped components of metal and plastic material.

The Rotundity Light source also uses a similar specific method to that of a Quadrate Light source to convert the vertically emitting light into a multi-angle uniform illumination mainly at medium and low angles, which can effectively reduce the hot spots and distribute light evenly on the object.  Applications include chamfer detection, surface inspection, and defect detection of round-shaped metal, glass and plastic material.

Coaxial Line Light source is built up of Line Light with additional modules of Coaxial and Tunnel Light to produce a full-angle illumination.  This source is applicable for detection of surface defects of various products such as steel plate, glass bottle, circuit board components and other things.

Tunnel Light source consists of a wide-angle divergent LED and a curved reflector to produce long-distance uniform illumination.  The hole/slot in the middle is selective to suit with the Area Scan Camera or the Line Scan Camera.  Cigarette package inspection, copper foil inspection and surface detection of large areas are some of its applications.

Point Light sources are available with a tip diameter of 8/9mm and a surface diameter of 6mm.  These sources can be used together with a microscope lens or a telecentric lens with coaxial function due to the advantage of having a small and bright emitting area.

IR Light source uses the LED which works in the near-IR region to have greater penetration than conventional visible light. It is suitable for testing items that require stronger penetrability such as contour detection of wrapped products, quantity detection in packed luggage and pixel edge detection in screens.

UV Light source uses a LED which works in the UV region and produces higher energy than visible light due to its shorter wavelength.  Invisible barcode reading, ITO location inspection, stimulates the fluorescence to check the sealing material and glue inspection are a few of the applications.